We’ve are very proud to announce the launch of our fifth pale ale to sit alongside others in the series at Jenkins & Sons, Urban Reef and Urban Beach Hotel.  Alike others in the series, Dr. Quartley is also inspired by local smuggler or pioneer. Dr. Quartley was the Christchurch surgeon who was paid with a keg of brandy (that’s a pretty good pay check!) – left anonymously on his doorstep – for helping injured smugglers in the 18th century. 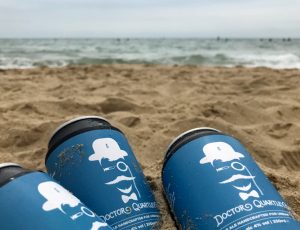 Local brewery Eight Arch Brewing Company in Wimborne helped us with this one and Dr. Quartley will be available on draught and in cans over the summer – we are sure you will love it just as much as we do.

Mark Cribb said: ““Since the launch of our first bottled ale in 2016 – named ‘Tregonwell’, we have had fantastic feedback from our customers. They love the fact that they are drinking something exclusive to the venues and also that it’s locally brewed.

There’s been a huge growth in local brewing in Dorset over the last few years and we’re thrilled to be part of it. We are passionate about introducing people to real beers, both ales and lagers, made by real people – not giant international brands. There’s better choice and bigger flavours now and we want people to discover this for themselves.”

Steve Farrell – owner and brewer at Eight Arch Brewing Company said: “Dr Quartley is a classic tasting English pale, with a bit Grapefruit on the snozz, it’s a pleasantly palatable summer sipper…  The Urban Guild team have been a big supporter of ours since we started brewing in early 2015 and being a local Dorset brewery, we love the fact that the pale ales are named after local smugglers.”

Mark also told us that a limited edition of Dr. Quartley will be available in 750 cans for the first customers who are keen to collect the first brews. So come on down and grab an ale!

Other craft ales exclusive to Urban Guild (if you fancy a tasting sesh) in the smugglers collection are: